Footsteps of Our Lord Tours 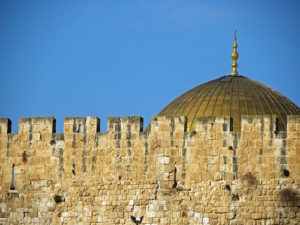 You will be met by your Christian Holyland Tours representative and transferred to your hotel in Tel Aviv..

Your tour begins with a drive to the Mount of Olives for a panoramic view of the city, followed by a visit to the church of All Nations, King David’s tomb and the room of the Last Supper on Mt. Zion. Next you’ll enter within the walls of the city and visit the Cardo, Temple Mount (note that entrance to the mosques are not included), Western Wall, Via Dolorosa, the Church of the Holy Sepulcher, the oriental Bazaar and the Garden Tomb. You’ll end the day by returning to your hotel in Jerusalem.

After your visit to Ein Karem to see the Church of Visitation, you’ll continue on to Yad Vashem, to visit the memorial to the holocaust, the Israel museum, the shrine of the book, where the dead sea scrolls are housed, and the miniature model of Jerusalem as it was during the second temple period. Next stop is Bethlehem* to visit the Church of Nativity and then back to your hotel in Jerusalem.

Today you’ll begin by driving to Qumeran and visiting this ancient city where the Dead Sea Scrolls where found. After that you’ll drive along the shore of the Dead Sea, the lowest place on earth, to Massada, the last stronghold of the Jews after the destruction of the Second Temple in 70 A.D. You’ll ascend Mt. Massada by cable car and visit Herod’s Palace, the food storerooms, and water irrigation system. When finished you’ll descend by cable car and return to Jerusalem for the night.

Today you’ll leave Jerusalem and drive through the Jordan Valley to the newly excavated city of Beit Shean to visit the Roman theatre. Next, your drive continues to Yardenit, the baptismal site on the Jordan River and then on to Nazareth via Cana of Galilee. Here you’ll visit the Church of Annunciation, St. Joseph’s workshop and Mary’s well. After that you’ll head to the Kibbutz Hotel for the night.

After a short tour of Tiberias, you’ll enjoy a boat ride to Capernaum where you’ll visit the remains of a 2nd century synagogue. Next is Tabgha, the site of the miracle of fish and loaves, and a visit to the Church of Multiplication with its 4th century mosaic floor. From here, it’s off to the Mount of Beatitudes, the place where Jesus delivered the Sermon on the Mount, followed by a rive to the Banias Springs and waterfalls and a tour of the Golan Heights. You’ll then return to the Kibbutz Hotel for the night.

After breakfast, your first stop of the day is a drive to Acre to visit the ancient city and harbor. Next, you’ll continue on to Haifa to view the Persian Gardens at the Bahai Temple and then it’s off to Megiddo. In Megiddo, identified as the site of Armageddon, you’ll visit the archeological excavations including the well-preserved water supply system and then continue your drive to   Caesarea   , the capital of Judea under the Romans. Here you’ll get to visit the excavations of the ancient city, the Roman Theatre and aqueduct. Your drive then continues along the coastal plain to Tel Aviv where you’ll be spending the night.

Your Christian Holy Land Tours representative will help transfer you from the hotel to Ben Gurion airport for your flight home.