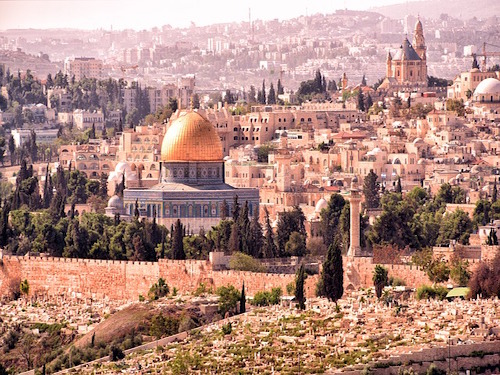 Your trip begins with your arrival at the Ben Gurion Airport. A Christian Holyland Tour representative will be there to meet and welcome you to Israel. You will then be taken to your hotel in Tel Aviv where you’ll spend the night.

The day begins after breakfast with a visit to the ancient Joppa (Jaffa) where the house of Simon the Tanner (Apostles 10: 9-16) and the place of the Miracle of the Resurrection of Tabita (Apostles 9: 36-43) took place. Next we’ll drive north to Caesarea Maritima where you’ll see the spectacular Roman Theatre and Port, Herod’s Palace, the Palace of the Roman Procurator (Apostles 23: 23 and Apostles 26: 23 – Paul; Apostles 10: 20-48 – Peter and Cornelius), the Amphitheatre and the Crusader’s City and Harbor. After that, we’ll proceed to Mount Carmel to visit the Monastery of the Muhraka, where Elijah fought with the priests of Baal. The rooftop of the monastery has a beautiful view of the Jezreel Plain, the site of many Biblical events. From Mount Carmel we’ll journey through the Druze Villages, Daliyat el Carmel and Usifiya and then on to Haifa for a panoramic view of the city and harbor. Then it’s on to Acre to visit the old city with its famous city walls, the Knight’s Halls and the Harbor.

We’ll continue on through Galilee and stay in Tiberias for the night.

We will meet up for breakfast and then its off to our boat ride on the Sea of Galilee where Jesus walked on the water (Matthew 14: 22-23). The boat ride ends at Ginnosar where we’ll visit an Ancient Boat that was found nearby and dates to the time of Jesus. Next we’ll drive to the Mount of Beatitudes (Matthew 5: 7) to the spot where the Sermon on the Mount was held. We’ll also see the spectacular heptagonal church that the Italian architect, Berluzzi, built on the shore. Then it’s on to Tabgha for a visit to the Church of the Loaves and the Fish (Matthew 14: 14-34) followed by a beautiful drive along the northern shores of the Sea of Galilee to Capernaum. Capernaum is the town where Jesus lived in the house of Peter and performed his miracles and healings (Matthew 4: 13, Matthew 8: 14-15). We’ll stop at the site of a synagogue where Jesus preached to the local community and then continue our drive through the Golan Heights. Crucial battles of the Six Day War were fought here in 1967 and we will look down on Israel from the heights the same way the Syrian army did before they were routed and the Golan Heights fell into Israeli hands. Last on our agenda for today is Banias, the ancient Caesarea Philippi (Matthew 16: 13-20) and one of the main sources of the Jordan River.

Then, back to the hotel for the night.

We’ll start the day with breakfast and then drive to the southern part of the Sea of Galilee to visit the Yardenit Baptismal Site where John the Baptist baptized Jesus. A Baptism will be held for anyone interested in participating. Next we’ll proceed to the ancient Biblical town of Beit Shean to see the new excavations of the Roman and Byzantine periods and then to Beit Alfah to its ancient synagogue filled with marvelous mosaics.

We’ll then drive to Gideon Springs where Gideon gathered the sons of Israel to fight the Midianates (Judges 7: 1) and wrap up the day with a drive south to Jerusalem for the night.

We’ll start the day with breakfast and then ascend the Mount of Olives for a breathtaking panoramic view of the Old City ofJerusalem and Temple Mount. We’ll walk down the Mount of Olives to the Church of Dominus Flevit (Luke 19: 41-44) and then to the Garden of Gethsemane where Jesus was arrested (Matthew 26: 36-58) to see the old olive trees and visit the Basilica of the Agony. Next we’ll drive through the Kidron Valley to the Dung Gate where we’ll enter the Old City to visit the Western Wall (Wailing Wall) – the holiest place for the Jews – and then walk a part of the Via Dolorosa via the exotic bazaar to the Church of the Holy Sepulcher. We’ll continue through the newly rebuilt Jewish Quarter and the 1 st Century Roman Cardo to Mount Zion where we’ll visit the traditional tomb of King David. We’ll spend time in the room of the Last Supper where we can pray to Jesus and imagine the Passover meal that the disciples took part in.

We’ll then return to the hotel for the evening.

After breakfast we’ll drive to the spectacular Model of Jerusalem for a glimpse of what it was like at the time of the Second Temple in Jesus’ time. We’ll see the views that Jesus would have seen whenever he came to Jerusalem to celebrate the Sabbath or holidays. After that we’ll head to Yad Vashem to see the Memorial for the victims of the Holocaust and then to the Synagogue at the Hadassah Hospital to see Marc Chagall’s famous stained glass windows portraying the 12 tribes. From here we’ll drive to the Israel Museum and the Shrine of the Book, home to the Dead Sea Scrolls.
We’ll also see the Knesset (the Israeli Parliament) and the Supreme Court. From there we’ll travel to Bethlehem to visit the Church of the Nativity (Luke 2: 1-7) and then back to the hotel for the night.

Right after breakfast we’ll drive south to the Judean desert via the Good Samaritan Inn (Luke 8: 25-37) to the famous mountain fortress of Massada – the stronghold of the Jews in the war against the Romans. We’ll ascend the mountain to the fortress in a cable car and visit Herod the Great’s palaces and their Roman Baths and pools. From this mountain overlook you will be able to see the Dead Sea. Next we’ll descend to the lowest place on earth for a possible “dip” and “float” in the salty Dead Sea. On our way back to Jerusalem we’ll stop in Qumran, the town of the Essene sect, where the Dead Sea Scrolls were found in a cave by a shepherd in 1948.

We’ll end the day back in Jerusalem at our hotel.